Just a couple of days ago, I was surfing through the code base of the project I am actually working on when I found something that disgusted myself a lot.

I smelled that something was wrong. Then, I checked unit tests associated to the class.

The value of Action influences two aspects in our class: the construction of the message and then sending process. Is it correct? Moreover, what if one day the construction process will become more complex? Unit tests number will increase exponentially, due to combinatorial calculus.

Let’s look how tests analysis can improve the architecture of software that we develop everyday.

So, which is the main problem with the above code? First of all, we have to understand what the code is meant to do. Basically, the method execute takes some data modeled as the Info object and a couple of states, from and to. Using this last information, it decides the Action to take and finally envelops this action into a Message that will be send using probably a Kafka producer.

There are many operations involved for a single method, aren’t there? To choose the action some algorithms is performed on from and to states. Then, using the result of such logic, an object of type Messageis built.

The main question is: how can I test that given the triplet (info, from, to) the right Message is built? All the logic is drowned inside the execute method. 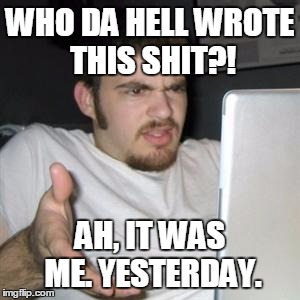 Let’s try to change some stuffs in order to obtain a better (a.k.a. more testable) design.

The root of evil

What is worse is that the creation of the message is a process that is all internal to the method. We do not have any chances to unit test it (unless we use some advanced feature of Mockito)!

How can we repair such a bad situation? Once, Romans would have said

And also I do.

The path through perfection

There is a principle in SOLID programming which is known as Single-Responsibility Principle. It represents the first “S” in the word SOLID. This principle states that

A class should have only one reason to change.

It is one of the more quoted principles of “Uncle Bob” Martin. Whenever you do not know what to say, quote the SRP ;) However this time it seems to be the right principle to use.

We saw that the execute method owns two responsibilities, that correspond to two different axis of change. Following the principle we should refactor the method (or better, the class that owns the method) so that it will contain only a single responsibility.

Basically we moved the responsibility relative to construction of Message type in a dedicated type. This lets us to put a better focus on each resource and to control better the evolution and maintenance of each type.

Should we have come to the same conclusion following another path? The answer is yes. We already stated that tests of the original component were not perfect. The construction logic of a Message type was not properly tested, due to the lack of visibility of this process.

Trying to solve this problem, we reasoned about the structure of the class, in terms of responsibility. We found that the class owned two different reasons to change. Following Robert C. Martin’s SOLID principles, this means that the class does too much.

Finally, we brought outside the original class one of the two responsibilities, obtaining code that was improved from different points of view.

Summarizing, following a need deriving from the testing process, we came to a design that seems to be good enough.

Starting from a “real life” code snippet, we saw how the absence of some unit test drove us to the refactoring of a class. The new version of the class also satisfies one of the basic principles of SOLID programming, the Single-Responsibility Principle. This means that the class is more maintainable, flexible, coherent, and so on.

Probably using Test Driven Development (TDD) the results would have be the same. Unfortunately, despite of my knowledge of the theory of TDD, I never had the opportunity to apply it in real life. I firmly believe that the effective application of TDD principles should be taught initially. Is there anybody out there who can confirm it?